Have you heard several tick-related stories recently? Listened to predictions that we will see an increase in tick populations? Read an article on why we may be seeing a rise in Lyme disease? Watched a story about a new case of Powassan virus? A lot of information has surfaced on ticks in the last few year. While there are hundreds of species of ticks, there is one main culprit in spreading both of the above diseases to humans. 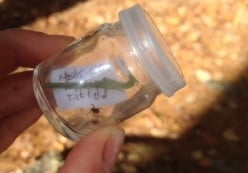 Ixodes scapularis, the black-legged tick or deer tick, is the main vector of Lyme disease and Powassan virus to humans. Black-legged ticks are born disease free, and it is during their first larval stage blood meal that the tick may acquire a disease from an infected host. White-footed mice and other small mammals are known in the Lyme disease cycle as the primary reservoir hosts carrying the disease and infecting the larval tick.

Warmer weather has arrived, along with new questions and concerns over ticks, Lyme disease, and the large number of U.S. cases reported in the Northeast. 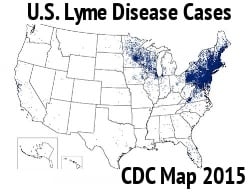 According to the CDC, there are 30,000+ cases of Lyme disease reported each year. Since national Lyme surveillance began, in the early 1990s, the number of annual Lyme cases has increased. Seasonal variations have contributed to what appears to be a northward expansion. These shifts are suspected to be associated with global climate change. Increases in temperature, changes in precipitation patterns, increases in extreme weather, and rising sea levels are capable of influencing the life cycle, distribution, and prevalence of vector-borne diseases by altering habitat availability and reproduction rates. Reasons contributing to the seasonal variability of tick activity and the probable northeast spread of Lyme disease are tick and host habitat range expansion, longer seasons for tick activity, and increased human exposure seasonally.
Continue reading As the leaves change and winter approaches, the fear of ticks and tick-borne disease seems to fade from people’s thoughts. Fall is a beautiful time to enjoy outdoor activities, such as camping, hiking, and fishing, but be aware that with the cooler weather comes the next wave of ticks.

Fall is the time when the adult stage of blacklegged ticks begins to emerge in full force. Blacklegged ticks, also known as deer ticks, are the primary culprits involved in the transmission of Lyme disease, as well as a barrage of other pathogens. Deer ticks require two years to complete their life cycle from egg to larvae to nymph to adult. Adults are typically active from October to May and can be found throughout the winter if the temperature exceeds 40 degrees Fahrenheit. Females lay an egg mass in late spring then larvae emerge in late summer. After a blood meal, the larvae will molt over winter and re-emerge the following spring as a nymph. Nymphs are most active from May through August. The poppy seed-sized nymphs are known to be the most responsible in human disease transmission due to their extremely small size, often going unnoticed when attached. Additionally, the nymphal ticks have experienced increased disease exposure from infected hosts during the prior summer.
Continue reading