What is Ehrlichiosis How Does it Spread?

“Ehrlichiosis” is used as an umbrella title that covers more than one species of Ehrlichia bacteria. The vector-borne disease is primarily associated with the bite of an infected Amblyomma americanum (Lone Star) tick. The Lone Star tick has been rapidly expanding across the U.S. and has been known for years to be the culprit in ehrlichiosis illnesses in pets, specifically dogs. It was not until the late 1980s that the tick was associated with human ehrlichiosis cases in the U.S. The Ehrlichia bacteria attacks white blood cells and results in symptoms similar to the flu, which could result in a more severe, or even deadly (2-3%), case for individuals with a weakened immune system. Today, between 800 and 1,000 human cases are reported annually. These cases may only represent a portion of actual infections, due to passive reporting, mild reactions that cause some patients to bypass proper medical attention, or medical professionals attributing flu-like symptoms to another illness.

In addition to tick bites, Ehrlichia bacteria may be transmitted through blood transfusions, full organ transplants, from mother to child during pregnancy, and direct contact with an infected animal’s blood.

Third Ehrlichia Species in the U.S.

An additional species of Ehrlichia was discovered in 2009, from patients in the Midwest, and temporarily called Ehrlichia muris-like (EML). Over 65 cases of EML have been reported, with Ixodes scapularis, also known as the blacklegged or deer tick, believed to be the primary vector. Properly educating the public on the tick vector species and taking preventive measures should be a goal in communities where ehrlichiosis cases have been reported.

Ehrlichiosis and the United States

Ehrlichia chaffeensis, which causes human monocytic ehrlichiosis (HME), and Ehrlichia ewingii, which causes human ewingii ehrlichiosis, are most common in the south central and southeastern states within the United States. The majority of all cases reported are from Ehrlichia chaffeensis infections. Arkansas, Delaware, Missouri, Oklahoma, Tennessee, and Virginia have reported the highest number of cases. With the rapid northern habitat expansion of the Lone Star tick, the number of ehrlichiosis cases in the United States could grow over the next few years. Personal preventative measures and integrated tick management (ITM) programs should be executed in endemic areas to help reduce this significant public health concern.

Reported Cases of Ehrlichiosis in the U.S. in 2014 A Global View of Ehrlichiosis

Cases of Ehrlichia chaffeensis have been reported in Europe, Africa, South and Central America. Additional species of Ehrlichia bacteria, causing illnesses in animals and/or humans, exist in Africa, Japan, and the Caribbean.

The expansion of the white-tailed deer and wild turkey populations in the U.S. has simultaneously expanded the geographic range of Amblyomma americanum as well as increased their population. Within the U.S. the species can be found as far south as Texas and as far north as central Wisconsin and almost all land east from there. The preferred habitat of the Amblyomma americanum includes woodlands with thick underbrush and around areas where animals rest (grassy meadows or brush along waterways).

The common name for the Amblyomma americanum is the Lone Star tick, referencing the single white dot on the scutum (shield on the back of a hard tick) of the adult female. The species is known for its aggressive biting during all lifecycle stages and can move extremely fast on the ground as well as around its host when compared to other species like the deer tick. Adults are typically active from February-June. Larvae, also known as ‘seed ticks,’ emerge from an egg mass in late summer and have been known to attack in swarms. Nymphs are present from May-August and can also be found feeding on humans and pets in large numbers. 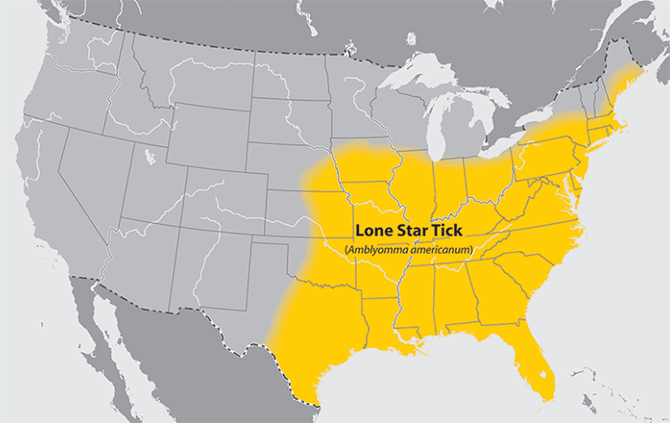 Individuals should take extra precautions to avoid tick-infested areas, especially during late spring, summer, and early fall. Dog and cat owners should perform regular tick checks as well as protect them with control products or preventative medication. Control of the tick vectors of ehrlichiosis can reduce the risk of being infected. However, control measures are not always easy or successful because the Amblyomma americanum ticks that transmit ehrlichiosis each have unique and complex life cycles with the ability to transmit diseases during different stages.