Understanding the Life Cycle of the Mosquito

Mosquitoes (Order Diptera, Family Culicidae) are some of the most adaptable and successful insects on Earth and are found in some extraordinary places. Virtually any natural or man-made collection of water can support mosquito production. They’ve been discovered in mines nearly a mile below the surface, and on mountain peaks at 14,000 feet, and if you know where to look, there is a good possibility that there are mosquitoes breeding in your own backyard. Not every species of mosquito causes problems for people, but many have profoundly negative effects. Mosquitoes can be distinguished easily from other flies by the fact that they have both a long, piercing proboscis and scales on the veins of their wings. Approximately 176 species of mosquitoes are found in the United States, with more than 3,000 species known throughout the world. In the United States, only a few of these species are important as carriers of disease, but many more are important nuisance species that dramatically affect peoples’ quality of life.

While all mosquitoes need standing water to reproduce, different mosquito species are found in different habitats. Some mosquitoes are considered “floodwater” species that breed in temporary water habitats, while others are considered “permanent water” mosquitoes and breed in water sources that remain for long periods of time. Other species have evolved so specifically that they will only lay their eggs in natural or artificial containers.

No matter what their preferred breeding habitat, all mosquitoes undergo the same four-stage life cycle: egg, larva, pupa, and adult, with the larval and pupal stages always being aquatic.

Depending on the particular species, the female mosquito lays her eggs either individually or in attached groups called rafts. The eggs are placed either directly on the surface of still water, along its edges, in treeholes, or in other areas that are prone to flooding from rain, irrigation, or flooding. In some species, the eggs may hatch within a few days of being laid, with the exact amount of time dependent on temperature. But if the egg is laid out of water and is subject to intermittent flooding, the embryo may lay dormant for several years until the ideal natural hatching conditions are met. Mosquitoes frequently overwinter in the egg stage, but some species may also overwinter as larvae or adults. 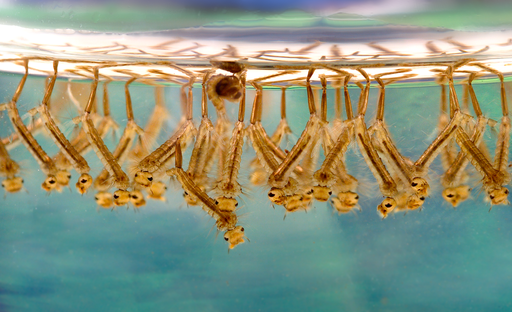 Once the egg hatches, the larval stage begins. The larvae of most mosquito species hang suspended from the water surface because they need air to breath. An air tube, called a siphon, extends from the larva’s posterior to the water surface and acts as a snorkel. Larvae filter feed on aquatic microorganisms near the water’s surface. As a defense mechanism, when alarmed, the larvae can dive deeper into the water by swimming in a characteristic “S” motion, which has earned them the nickname “wigglers” or “wrigglers”. As they feed, larvae outgrow their exterior covering and form a new exoskeleton, casting off the old ones. The stages between these molts are called instars. The larval stage has four instars. The length of the larval stage ranges from 4 to 14 days, varying with species, water temperature, and food availability.

In the pupal stage, no feeding occurs, however the pupa must still breathe air at the water’s surface and is sensitive to light, shadows, and other disturbances. Pupae are also physically active and employ a rolling or tumbling action to escape to deeper water, which is why they are commonly referred to as “tumblers”. The pupal stage lasts from 1 1/2 to 4 days, after which the pupa’s skin splits along the back allowing the newly formed adult to slowly emerge and rest on the surface of the water.

The male adult mosquito will usually emerge first and will linger near the breeding site, waiting for the females. Mating occurs quickly after emergence due to high adult mortality rates. As much as 30% of the adult population can die per day. The females compensate for this high rate by laying large numbers of eggs to assure the continuation of the species. Male mosquitoes will live only 6 or 7 days on average, feeding primarily on plant nectar, and do not take blood meals. Females with an adequate food supply can live up to 5 months or longer, with the average female life span being about 6 weeks. To nourish and develop her eggs, the female usually must take a blood meal in addition to plant nectar. She locates her victims by the carbon dioxide and other trace chemicals exhaled, and the temperature patterns they produce. Mosquitoes are highly sensitive to several chemicals including carbon dioxide, amino acids, and octenol. The average female mosquito’s flight range is between 1 and 10 miles, but some species can travel up to 40 miles before taking a blood meal. After each blood meal, the female will oviposit (lay) her eggs, completing the life cycle. While some species oviposit only once, others may lay eggs several times over the course of their lives.