What is West Nile Virus and How Does it Spread?

West Nile virus (WNV) is a mosquito-borne arbovirus that was discovered in 1927 in the West Nile sub-region of Uganda. The first serious outbreaks of WNV occurred in the mid-1990s in Algeria and Romania. The virus was introduced in the United States in 1999, with the first case being identified in New York City. That year, 62 human cases, 25 horse cases, and countless bird diagnoses were reported in New York State. The CDC has since received more than 40,000 reports of people affected with WNV in the lower 48 states, making it the most common virus transmitted by mosquitoes to humans in the U.S. Because only a portion of all cases are reported, the CDC believes the actual number of illnesses may be as high as 700,000. 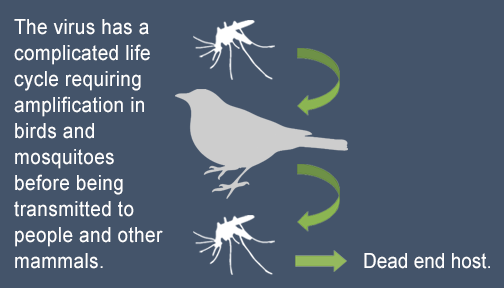 WNV is typically transmitted to humans by mosquitoes that have previously fed upon an infected bird. While over 150 species of mosquitoes have been known to carry the virus, the main vector species in the U.S. are Culex pipiens, Culex tarsalis, and Culex quinquefasciatus. These mosquitoes are all active at night, and most cases of infection occur during the summer months. Transmission of the virus has occurred in a very small number of cases through blood transfusion, organ transplant, and breastfeeding; however, WNV is not transmitted from person-to-person or from animal-to-person through casual contact. 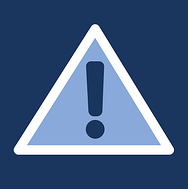 Severe cases of WNV infection can affect the central nervous system and result in a number of serious neurological diseases.

West Nile encephalitis, West Nile meningitis, and West Nile poliomyelitis are all diseases that cause inflammation of the brain and/or spinal cord and the surrounding tissues. These diseases can be debilitating or, in some cases, even deadly.

As of December 14, nearly every state has reported West Nile virus infections in people, birds, or mosquitoes in 2021. Arizona is reporting the highest number of human cases (1,426). 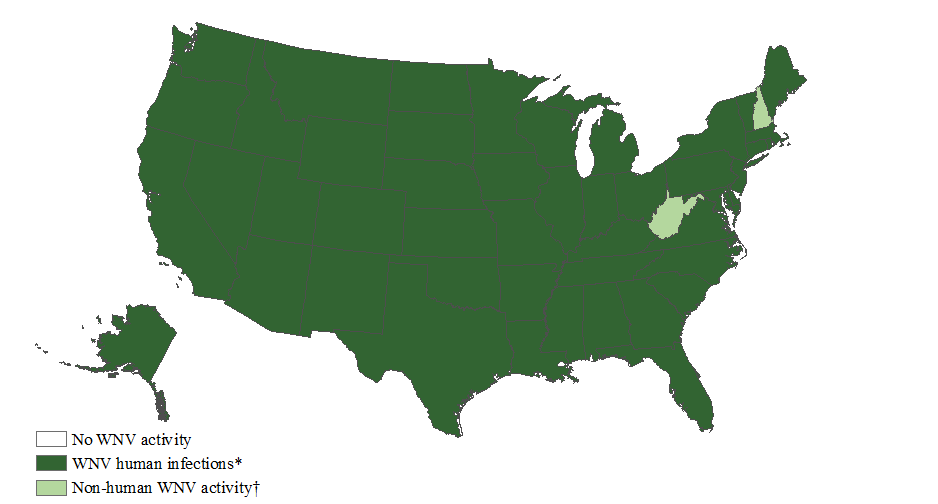 This map from CDC shows West Nile virus activity across the U.S. in 2021.

West Nile virus is the cause of the largest outbreak of neuro-invasive disease ever observed. The virus can be found throughout Africa, regions of Europe and the Middle East, West Asia, Australia, Canada, Venezuela, and the United States. Outbreak areas are typically found along major bird migratory routes, with the largest outbreaks having occurred in Greece, Israel, Russia, Romania, and the United States. Since there is no vaccine for humans, the only way to reduce the spread of this dangerous disease is to raise awareness of prevention measures through public education and to implement mosquito surveillance and control programs in at-risk areas.

West Nile virus is spread by the Culex species of mosquito. The main vector species in the U.S. are Culex pipiens, Culex tarsalis, and Culex quinquefasciatus. These mosquitoes typically feed from evening to morning.

Culex pipiens, commonly known as the Northern House Mosquito, is found mainly in the Eastern U.S. It is a medium-sized mosquito with a brownish or grayish body and brown wings. Their larvae thrive in containers of stagnant, polluted water, and thus these mosquitoes are the primary target of the campaign to drain backyard sources of standing water as a way to reduce the incidence of WNV. In addition to WNV, Culex pipiens is a known carrier of St. Louis encephalitis, Western Equine encephalitis, and heartworm in dogs.

Culex tarsalis lives throughout the U.S., but is found mainly in the Midwest and West. It is a black mosquito distinguished by a white band on its proboscis, as well as white stripes along its middle and hind legs. Culex tarsalis is most active in the few hours after sunset.

Culex quinquefasciatus, the Southern House Mosquito, can be found in the southeastern region of the U.S. It is a medium-sized mosquito that is brown in color, and is a vector of WNV, St. Louis encephalitis, Western Equine encephalitis, and avian malaria.

3:  Larval Mosquito Control
Our trained field technicians inspect both known sources of standing water and any newly discovered sites for the presence of mosquito larvae. Eliminating mosquitoes prior to their becoming adults is an important element of controlling West Nile virus and other mosquito-borne diseases because it stops mosquitoes before they acquire the virus and have the opportunity to transmit it to people.