As discussed in a previous Mosquito Surveillance blog post, a well-designed surveillance program provides important information necessary to guide a modern mosquito control program. However, trapping the mosquitoes is only the first step in surveillance. Once the mosquito specimens are collected, they must be processed in the laboratory. 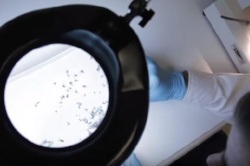 Once the sample is euthanized, the mosquitoes are counted to determine how many were captured. If the trap count is very high, the numbers are estimated and only a sample is identified. How high is high? In locations without mosquito control and with good sources of water, nectar, blood-meals, and harborage, trap counts in the tens of thousands of mosquitoes in one night have been recorded, and not just in the tropics!

Many people are surprised to find out that there are more than 3,000 species of mosquitoes  worldwide, of which at least 175 are recorded to occur in North America north of Mexico. It takes specialized training to learn how to distinguish one species from another, but accurate species identification is critically important to surveillance data’s value in mosquito control. 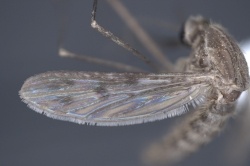 Just as with butterflies, adult mosquito bodies and wings (Anopheles quadrimaculatus – Common Malaria Mosquito pictured here) are usually covered with tiny scales that together create a variety of species-specific patterns. While most species have scales that are black, gray, brown, and white, there are some primarily tropical species, such as the Sabethes cyaneus – the Paddle-legged Beauty, that display iridescent blue, purple, green, silver, and gold colors as well, rivaling the butterflies for beauty, albeit at a more microscopic level. These patterns, along with the placement, presence, or absence of various sets of hairs and spines, are primarily what entomologists use to distinguish one species of mosquito from another. In some places, only one or two mosquito species dominate the trap sample, but in locations with a high diversity of habitat types, it is possible to find more than a dozen species in a single night’s trap collection. 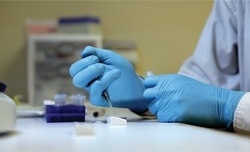 Surveillance trap data is used to guide a mosquito control program by providing information about which species are present and how large their populations are. Since different species are adapted to different kinds of water bodies during the larval development, trap data tells us what kind of water source the mosquitoes are likely to have come from. This can tell us how good a job our field technicians are doing in their efforts to control the larvae. It may also indicate whether species found in the traps (and potentially biting the area citizens) are likely to be “fly-ins” that spent their larval stages in a location outside of our control area and then flew into town as adults in search of shade, nectar, and perhaps a blood meal. The trapping can also indicate whether or not there is a need for adult control (for example, ULV truck fogging), in most situations triggered by a pre-determined trap count threshold. Finally, in the case of vector species, surveillance traps can provide specimens that can be  tested for disease, and give an indication of real disease risk in the area surrounding the trap.

Trap data is also provided to our customers regularly as a way for them to monitor the progress of their mosquito control program, and to keep the citizens informed about the species activity in their area. Especially when high numbers of disease vector species are being encountered in the traps, customers may choose to increase educational communications regarding ways citizens can protect themselves from mosquito-borne diseases. In many cases, weekly trap data is also shared with local and regional public health officials, and with the news media, in order to coordinate a rapid cooperative response, since an informed public can help reduce the incidence of disease significantly.

VDCI is committed to public education and spreading awareness throughout the U.S. about the dangers of mosquito-borne diseases and their preventability, with the overarching goal of reducing illness and fatality statistics. Our dedicated and experienced team works tirelessly to prevent the spread of vector-borne diseases in all of the contracts we service.

If you would like more information about any aspect of an Integrated Mosquito Management (IMM) program, including surveillance, disease testing, larval control or adult control, please contact Vector Disease Control International (VDCI) at 800.413.4445. We will help provide you with details to begin a meaningful program to protect public health in your community.

Michael “Doc” Weissmann is the Chief Entomologist at Vector Disease Control International (VDCI). He has been identifying mosquitoes since the mid-1980s, and has been in charge of the Surveillance Laboratory in Colorado since 2003. Doc received his B.A. and M.A. in Biology from the University of Colorado, and his Ph.D. in Entomology from Colorado State University. He can be reached through the VDCI website or by calling 800.413.4445.