What You Should Know About Zika Virus

Written By The Staff at VDCI 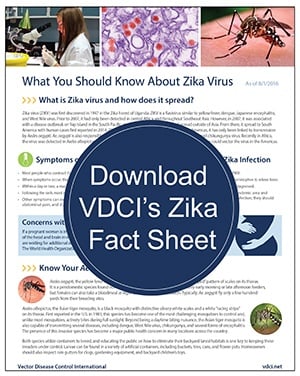 What is Zika virus?
Zika virus (ZIKV) was first discovered in 1947 in the Zika Forest of Uganda. Shortly thereafter, it was isolated from mosquitoes in the area and then humans in 1968. ZIKV is a flavivirus similar to yellow fever, dengue, Japanese encephalitis, and West Nile virus (WNV). The disease had only been detected in central Africa and throughout Southeast Asia until associated with a diesease outbreak on Yap Island, in the South Pacific in 2007. From there, it spread to South America with human cases first reported in 2014.
How does the virus spread?
ZIKV does not appear to require an animal reservoir, like WNV, which is perhaps a factor in the rapid spread throughout the Americas. Non-infected mosquitoes are able to acquire the virus after feeding directly on infected humans. Without a “middle man” in the endemic cycle of ZIKV, the virus can spread quite rapidly where abundant, competent vector mosquitoes and humans are present together. Today, there is active transmission of the virus throughout South and Central America and the Caribbean Islands. Please refer to Figure 1 in VDCI’s Zika Virus Fact Sheet.

Symptoms of Zika infection:
Typically, people with ZIKV infection begin showing symptoms with a mild headache. Within a day or two, a maculopapular rash may appear and can cover many parts of the body (arms, hands, face, and chest). Following the rash, people generally report continued fever, malaise, and body aches. Other symptoms can include diarrhea, constipation, abdominal pain, and dizziness.
Treatment of Zika Infection:
Treatment includes rest and the use of acetaminophen to relieve fever. Patients should also be advised to drink plenty of fluids if diagnosed. If anyone has recently traveled to a known endemic area, and are displaying any of the symptoms described above, they should consult their physician immediately.
Concerns with Pregnancy and Perinatal Infections:
If a pregnant woman is infected with the Zika virus, it may result in microcephaly, a birth defect causing underdevelopment of the head and brain in newborn children. However, the link between ZIKV and infant microcephaly is poorly understood at this time.

Preventing Zika Infection
As always, we urge residents to reduce mosquito-breeding on the property by discarding or draining sources of standing water. Additional preventive measures, especially by pregnant women, are recommended during the daytime when Ae. aegypti are most active. Individuals that are traveling, or planning to travel, to countries where ZIKV or other mosquito-borne viruses are found, are urged to visit www.cdc.gov/zika/prevention and take the precautions as listed by the CDC.
Mosquito Vectors of Zika virus:
ZIKV is transmitted by Aedes mosquitoes. In the Americas, it has only been linked to transmission by Aedes aegypti. Ae. aegypti is also responsible for the transmission of dengue virus, yellow fever virus, and chikungunya virus. Recently in Senegal and again in Gabon, the virus was detected in Aedes albopictus, or the Asian tiger mosquito; hence, it is likely that Ae. albopictus could vector the virus in the Americas. Ae. aegypti, the yellow fever mosquito, is a medium-sized mosquito easily distinguished from Ae. albopictus by a silvery-white “lyre-shaped” pattern of scales on its scutum. Both species are peridomestic species found not far from human dwellings, and are particularly abundant in towns and cities. They are primarily early morning or late afternoon feeders, but females can also take a blood meal at night under artificial illumination. Aedes aegypti is reported to fly only a few hundred yards from breeding sites. Larvae can be found in a variety of artificial containers, including buckets, tires, cans, and flower pots.

Zika and Aedes aegypti in the United States:
As of February 2016, most US ZIKV cases were imported from travelers who contracted the virus in other countries and returned to the US while infected.

Both Ae. aegypti and Ae. albopictus are limited in their distribution in the US. Therefore, it is unlikely that ZIKV will become a disease that circulates in the local mosquito populations throughout the US like WNV, but select areas of the US are at higher risk because of climate. Please open VDCI’s Zika fact sheet, to view a map depicting each mosquito’s US distribution.

Controlling Aedes aegypti/albopictus and Zika virus: How VDCI can help
VDCI recommends a 4-pronged approach for an effective mosquito strategy designed to target all phases of the mosquito’s life cycle:
(1) Public Education –  Focusing on the removal of mosquito breeding source.
Given that these mosquito vectors live in and around urban settings, laying eggs in water-holding containers, community understanding of the sources of these mosquitoes and how to properly “mosquito-proof” their homes is critical. Furthermore, educational pieces that encourage individuals and families to seek prompt medical care when Zika virus is detected in a community should be distributed. Outreach to neighbors, work colleagues, and members of social clubs can reinforce messages disseminated through the mass media.
VDCI has developed numerous brochures, door hangars and fact sheets for various mosquito-borne diseases. In conjunction with door-to-door larvicide efforts, these materials can be delivered to homes and residents throughout affected neighborhoods.

(2) Surveillance – Seeking to understand a vector’s presence.
It is important to determine the mosquito distribution, density, and species composition throughout the target area. Furthermore, it will provide direct evidence of an increased transmission risk of Zika virus.
VDCI uses multiple traps to capture weekly samples of mosquitoes in various stages of their lifecycle. This complete surveillance approach is crucial for the efficient and precise control efforts in residential areas. (3) Larval Mosquito Control – Focusing on the application of environmentally safe larvicides for the control of immature mosquitoes.
When mosquito larvae are detected in an area, trained and experienced ground crews preferentially apply treatments to all areas of standing water, stagnant pools, and water-holding containers. Only insecticides approved by the Environmental Protection Agency (EPA) for the control of mosquitoes should be used for all control applications.

Our crews work in two person teams to canvass a neighborhood. Appropriate habitats are inspected and, when appropriate, treated via backpack and hand-delivered applications of larvicide.

(4) Adult Mosquito Control –Targeted application of products for the effective reduction of pestiferous and disease-causing mosquitoes.

Truck-mounted and aerial ULV applications are often used to control adult mosquitoes. These methods have limited efficacy against the primary targets of Zika virus, due to the flight behavior of the Ae. aegypti and Ae. albopictus.
VDCI recommends the deployment of two person teams to conduct targeted ULV applications combined with residual “barrier” applications via backpack applicators to mosquito harborage areas near homes and other structures. When combined with our larvicide efforts, these applications have proven highly effective at significantly reducing local populations of Ae. albopictus.

VDCI is committed to you
VDCI is committed to public education and spreading awareness throughout the U.S. about the dangers of mosquito-borne diseases and their preventability, with the overarching goal of reducing the illness and fatality statistics in 2016. Our dedicated and experienced staff works tirelessly to prevent the spread of mosquito-borne diseases in all of the contracts we service. If you would like more information about any aspect of mosquito surveillance, disease testing, or adult control, please contact Vector Disease Control International (VDCI) and we will help you get started immediately.
Contact the professionals at 800-413-4445 for all of your mosquito control needs.
Since 1992, Vector Disease Control International (VDCI) has taken pride in providing municipalities, mosquito abatement districts, industrial sites, planned communities, homeowners associations, and golf courses with the tools they need to run effective mosquito control programs. We are determined to protect the public health of the communities in which we operate. Our mosquito control professionals have over 100 years of combined experience in the field of public health, specifically vector disease control. We strive to provide the most effective and scientifically sound mosquito surveillance and control programs possible based on an Integrated Mosquito Management approach recommended by the American Mosquito Control Association (AMCA) and Centers for Disease Control and Prevention (CDC). VDCI is the only company in the country that can manage all aspects of an integrated mosquito management program, from surveillance to disease testing to aerial application in emergency situations.