In 2017, the scientific community, the public, and the press maintained their interest in the Zika virus outbreak of 2016. Articles surfaced on the potential long-term health complications attributed to contracting the virus. The public received extra education on personal protective measures to reduce the spread of Zika. And the scientific community reviewed trusted and experimental methods to prevent future outbreaks. In addition to Mother Nature bringing new mosquito-related problems to Texas and Florida last year, in the floodwaters left by Hurricanes Harvey and Irma, both states reported the only locally-acquired U.S. cases of Zika virus for the second year in a row.

There were several mosquito-borne diseases reported in the United States in 2017. In this blog, we will focus on: West Nile Virus (WNV), Eastern equine encephalitis (EEE), and Zika. WNV remains the most common virus transmitted by mosquitoes to humans in the U.S. as well as responsible for taking the highest number of human lives.

All of the data points in this post were obtained from the Center for Disease Control (CDC)’s website as of 02/13/2018.

47 out of 50 states and the District of Columbia have reported West Nile virus infections in people, birds, or mosquitoes in 2017. Overall, 2,002 cases of WNV were reported in humans, and there were 121 (6%) confirmed deaths in 2017. While this data shows a decrease in the number of human cases reported in 2016 (2,149), it also brings attention to the increase in lives lost, when compared to the 106 (5%) confirmed deaths in 2016. The states reporting the highest number of WNV disease cases* in 2017 include:

Georgia did not report as many WNV cases (47) as several other areas of the country; however, the state reported one of the highest numbers (7) of confirmed lives lost as a result of the virus.

WNV is typically transmitted to humans by mosquitoes that have previously fed upon an infected bird. While over 150 species of mosquitoes have been known to carry WNV, the main vector species in the U.S. are Culex pipiens, Culex tarsalis, and Culex quinquefasciatus. These mosquitoes are all active at night, and most cases of infection occur during the summer months. Approximately 20% of people affected by WNV will experience flu-like symptoms including fever, headache, nausea, muscle pain, and swollen lymph glands. Other symptoms may include a stiff neck, rash, sleepiness or disorientation. Less than 1% of those infected will develop West Nile Encephalitis or Meningitis, which can lead to coma, tremors, convulsions, paralysis, and even death.

To learn more about the symptoms, treatment, and mosquito species that vector this virus, visit our educational page on West Nile virus. 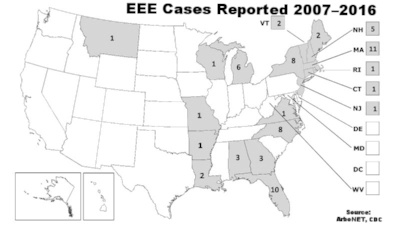 The reason EEE is less common in humans is that the primary mosquito vector (Culiseta melanura), does not typically feed on humans. It is believed that EEE virus is mainly transmitted to humans and horses by bridge vectors that have contracted the virus by feeding on infected birds. Symptoms typically occur four to ten days after a bite from an infected mosquito and include fever, headache, vomiting, muscle aches, joint pain, and fatigue. In rare cases, infection occurs in the brain and spinal cord leading to sudden high fever, stiff neck, disorientation, seizures, and coma. The mortality rate of those that develop EEE is about 33%, the highest among human arboviruses (a virus transmitted by arthropod vectors) cases reported in the U.S. The disease is also a concern for horses. There is a vaccine available for horses, and horse owners are encouraged to discuss an on-going vaccination schedule with their veterinarians. Currently, there is no human vaccine for EEE.

To learn more about the symptoms, treatment, and mosquito species that vector this virus, visit our educational page on EEE virus. In 2017, within the United States, there were 4 ZIKV cases of local mosquito-borne transmission, 5 cases acquired via sexual transmission, and 409 travel-associated cases reported to the CDC. The 4 local cases were from Florida (2) and Texas (2), the same states that reported the only local cases in 2016 (Florida: 218 and Texas: 6).

Many individuals learned about Zika during the outbreaks in South and North America; however, the virus was first discovered in 1947 in the Zika Forest of Uganda. In the Americas, it has only been linked to transmission by Aedes aegypti or the Yellow Fever mosquito. Ae. aegypti is also responsible for the transmission of dengue virus, yellow fever virus, and chikungunya virus. In Africa, the virus was detected in Aedes albopictus or the Asian tiger mosquito; hence, it is possible that Ae. albopictus could vector the virus in the Americas.

When symptoms occur, they typically begin with a mild headache and fever. Within a day or two, a maculopapular rash may appear and can cover many parts of the body. Following the rash, people generally report continued fever, malaise, and body aches. Other symptoms can include diarrhea, constipation, abdominal pain, and dizziness. Treatment for symptoms includes hydration, rest, and the use of acetaminophen to relieve fever. If a pregnant woman is infected with Zika virus, it may result in microcephaly, a birth defect causing underdevelopment of the head and brain in newborn children. Currently, there is no vaccine or cure for ZIKV.

To learn more about the symptoms, treatment, and mosquito species that vector this virus, visit our educational page on Zika virus.

VDCI is committed to public education and spreading awareness throughout the U.S. about the dangers of mosquito-borne diseases and their preventability, with the overarching goal of reducing illness and fatality statistics in 2018. Our dedicated and experienced team works tirelessly to prevent the spread of mosquito-borne diseases in all of the contracts we service. If you would like more information about any aspect of an Integrated Mosquito Management (IMM) Plan, including mosquito surveillance, disease testing, adult control, or aerial applications, please contact Vector Disease Control International (VDCI), and we will help you get started immediately.