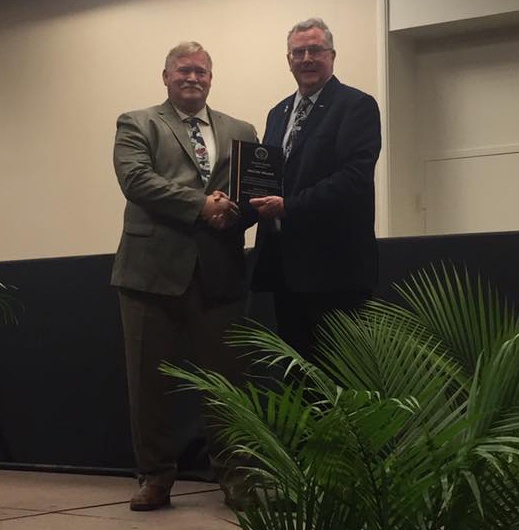 AMCA hosted its 83rd Annual Meeting in San Diego earlier last month, and attendees were excited to learn about cutting-edge technology, the challenges associated with Zika virus, and to simply catch up with colleagues and partners from around the country. The VDCI team contributed to the meeting by presenting on key industry topics, hosting a young professional entering the world of mosquito management, and had the additional honor of seeing a team member recognized for 40 years of industry contributions!

During the meeting’s opening ceremony, Mr. Malcom Williams (shown left in above image) received AMCA’s Industry Award which highlighted his excellent service and innovation in the field of mosquito control. Malcom has been working in the mosquito control industry since 1987 and has served as VDCI’s Aerial Division Manager since 2004. During his time in the industry, Malcom has accumulated over 14,500 hours of flight time completing aerial applications to manage mosquito populations. While on the ground, Malcom designed and helped to build eleven spray planes, and worked closely with the Federal Aviation Administration (FAA) to develop congested area plans for safe aerial application. Each spray system must be tested and approved by the FAA, so Malcom spends countless hours working with the FAA to ensure the safe operation of mosquito planes. He has even been consulted to perform safety checks for companies designing new spray equipment. His work with mechanics to modify spray systems for aerial mosquito application has advanced the mosquito control industry and changed the way aerial missions are conducted. VDCI is extremely grateful to have Malcom as a part of our team! 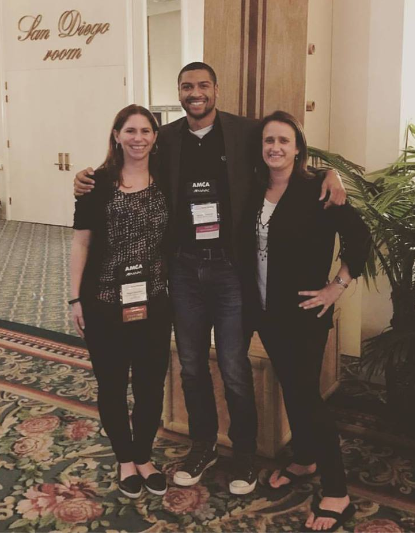 n addition to recognizing the old pros like Malcom, who have demonstrated their value to the mosquito management industry, VDCI enjoys taking part in AMCA’s Young Professionals (YP) Industry Shadowing Program which helps students and young professionals who are just beginning their career. This year VDCI sponsored Megan Saunders (far left in image) who is a graduate student at the University of Maryland where she is completing her Ph.D. in Urban Mosquito Ecology and becoming an active member in the mosquito management world. Our 2016 award recipient, Kennen Hutchinson (shown middle) made us proud this year with his presentation “Mosquito Mayhem: Are Illinois Mosquitoes Ready for Chikungunya?”. He will be starting a Ph.D. program at Western Illinois University this spring. Be on the lookout for these rising stars!

Last but not least, Dr. Broox Boze was able to place an additional spotlight on the hard work of the entire VDCI team by presenting twice during the week-long meeting. Her presentation “Emergency Response Operations Efforts to Control Zika Virus and Aedes Aegypti” provided a highlight of VDCI’s efforts in the Marshall Islands as a part of a larger partnership with the CDC to protect public health in U.S. Territories. Dr. Boze’s second presentation “Field Assessment of Low-Volume Truck-Mounted Larvicide Applications” covered specific applications in Broward County, Florida. The presentation discussed the challenges associated with new technologies and innovative control techniques, including wide-area larvicide applications via truck-based equipment for the management of Aedes aegypti and Ae. albopictus.

VDCI is committed to public education and spreading awareness throughout the U.S. about the dangers of mosquito-borne diseases and their preventability, with the overarching goal of reducing illness and fatality statistics. Our dedicated and experienced team works tirelessly to prevent the spread of mosquito-borne diseases in all of the contracts we service. If you would like more information about any aspect of an Integrated Mosquito Management (IMM) program, including mosquito surveillance, disease testing, or adult control, please contact Vector Disease Control International (VDCI) at 800.413.4445, and we will help you get started immediately.

Dr. Broox Boze is a Program Manager in Northern Colorado. She has also assisted in Emergency Response partnerships throughout the U.S. and within several U.S. Territories. Dr. Boze holds a Masters of Science in Biology and a Ph.D. in Zoology from Colorado State University. She can be reached through the VDCI website or by calling 800.413.4445.